When I tell you that the largest corporate investors in e-cigarettes are the tobacco industry, you have every right to be suspicious.

Some patchy evidence suggests that e-cigarette use may facilitate smoking cessation, but definitive data are lacking. No e-cigarette has been approved by the FDA as an aid to stopping smoking. Environmental concerns and issues regarding non-user exposure exist. The health impact of e-cigarettes, for users and the public, cannot be determined with currently available data (Priscilla Callahan-Lyon, Electronic cigarettes: human health effects, Tobacco Control, 2013). 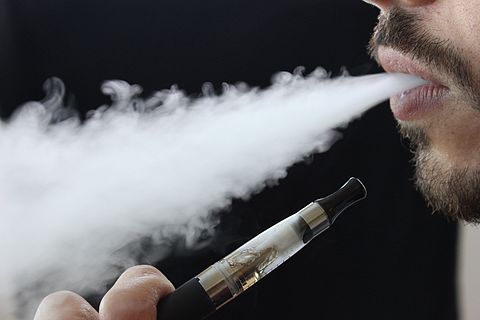 Has this situation changed since 2013? Yes, it most certainly has. There have been many new studies of e-cigarette use since 2013 and the new evidence is not looking good for the e-cigarette.

The elimination of cigarettes and other combustable tobacco products can prevent tens of millions of tobacco-related deaths. The introduction of e-cigarettes could be an important step towards the elimination of the scourge of smoking. However, there is one drawback (if you’ll pardon the pun!). Nicotine itself is not harmless. Nicotine exposure can itself do harm, especially during periods of developmental vulnerability such as the fetal through adolescent stages. There can be multiple adverse consequences to early nicotine exposure including impaired fetal brain and lung development, and altered development of cerebral cortex and hippocampus in adolescents.

Back to the Future: Recent Legislation
E-cigarettes are marketed as a smoking cessation aids or as a tobacco replacement. Cancer and respiratory experts see the same ploys being used today with e-cigarettes as occurred in the 1940s with cigarettes, when the Western World started smoking en masse. Vapourizers are often distributed for free and pitched by celebrities and even doctors as cool, liberating and safe. However, they are not approved in Canada and in a few other countries. In March 2009, Health Canada issued an Advisory to Canadians NOT to use e-cigarettes as “these products may pose health risks and have not been fully evaluated for safety, quality and efficacy by Health Canada.” Health Canada issued a notice to stakeholders indicating that all electronic products intended to administer inhaled doses of nicotine are considered new drugs and as such fall under the Food and Drugs Act.

From May 20 2016 new laws came into force in the UK. The changes include rules meaning standardised plain packaging on vaping products and making them weaker. The rules will be enforced under the Tobacco and Regulated Products Regulations 2016 with a one-year transitional period for the sale of old stock. The new rules were as follows:

Smaller Containers
The amount of nicotine vapers inhale in each container will be reduced in two ways. Firstly, the new maximum size of each container will be 10ml. Secondly, the maximum strength of e-cigarette cartridges will drop to 20mg per millilitre (2 per cent) from 24mg
Health warnings
The front and back of e-cigarette packaging will contain health warnings much like regular cigarettes. The warnings will state: ‘This product contains nicotine which is a highly addictive substance’.
E-liquid cartridges must be childproof
New rules state cartridges must be childproof and tamper proof.
Adverts will change
Under the new laws, e-cigarette companies will no longer be able to make claims about vaping being beneficial to people’s health. This includes a ban on comparisons between the merits of vaping compared to smoking cigarettes. Celebrities will also not be allowed to endorse e-cigarettes and free samples cannot be given out in promotional campaigns.
Greater government scrutiny
Manufacturers will submit information to the government on the contents of their products before being allowed to sell them in the UK.
E-cigarettes as a Gateway to Traditional Smoking for Adolescents
One effect of the unregulated distribution of e-cigarettes is that it is ‘renormalizing’ smoking (Fairchild, Bayer & Colgrove, 2014). Increasing adolescent e-cigarette use encourages use of traditional cigarettes and dual use, a transition to cigarette use following use of e-cigarettes. E-cigarettes acting as a gateway to conventional tobacco smoking is something that adolescents and young adults perceive themselves, according to a Swiss study (Akre and Suris, 2015).

E-cigarettes as Carriers for Drugs more Potent than Nicotine
In selling e-cigarettes, one is opening doors to drug use beyond nicotine. E-cigarettes can be used with all kinds of fluids and mixtures apart from e-liquid. They work well with marijuana. Researchers surveyed 3,847 Connecticut high school students and found nearly one in five e-cigarette users also have used the device to vaporize cannabis or byproducts like hash oil. 18.7 percent of users reported using e-cigarettes to vaporize marijuana. Hash oil can also be substituted for the nicotine solution in many traditional e-cigarettes, and some vendors sell e-cigarettes specifically designed for use with marijuana leaves or wax infused with THC, the active ingredient in marijuana. Vaping concentrated liquid forms marijuana can be much more potent than smoking dried marijuana leaves.

Drug users have also discovered a method of adapting e-cigarettes to vaporize a potent class of hallucinogen known as dimethyltryptamine or DMT. This “hack” is being discussed openly on multiple web forums, with DMT enthusiasts describing how simple it is to consume the drug using an e-cigarette. Certain e-cigarettes generate precisely the correct temperature needed to vaporize the drug. Described as “the spirit molecule” by some users, DMT is one of the strongest known hallucinogens. Depending on the dose and method of ingestion, DMT effects range from short-lived mild hallucinations to much more immersive and hypnotic experiences. Many DMT users report having deeply spiritual experiences, including traveling to other ‘realms.’ Although modifying an e-cigarette in preparation for smoking DMT is relatively simple, errors in this process could prove dangerous. Reports have surfaced online of people claiming to have felt a burning sensation on their lungs while attempting to smoke the drug in this manner.

E-cigarettes as a Tool for Long-term Smoking Cessation
The World Health Organization (WHO) have banned therapeutic claims by manufacturers of ENDS. Sara Kalkhoran and Stanton A Glantz (2016) studied E-cigarettes and smoking cessation in real-world and clinical settings. Because smokers are increasingly using e-cigarettes for many reasons, including attempts to quit combustible cigarettes and to use nicotine where smoking is prohibited, the investigators aimed to assess the association between e-cigarette use and cigarette smoking cessation among adult cigarette smokers, irrespective of their motivation for using e-cigarettes.

They searched PubMed and Web of Science between April 27, 2015, and June 17, 2015. Data extracted included study location, design, population, definition and prevalence of e-cigarette use, comparison group (if applicable), cigarette consumption, level of nicotine dependence, other confounders, definition of quitting smoking, and odds of quitting smoking. The primary endpoint was cigarette smoking cessation. Odds of smoking cessation among smokers using e-cigarettes compared with smokers not using e-cigarettes were assessed.

38 studies were included in the systematic review. Odds of quitting cigarettes were 28% lower in those who used e-cigarettes compared with those who did not use e-cigarettes. The association of e-cigarette use with quitting did not significantly differ among studies of all smokers using e-cigarettes compared with studies of only smokers interested in cigarette cessation. Other study characteristics (design, population, comparison group, control variables, time of exposure assessment, biochemical verification of abstinence, and definition of e-cigarette use) were also not associated with the overall effect size.
Interpretation. Kalkhoran and Glantz (2016) concluded that: “As currently being used, e-cigarettes are associated with significantly less quitting among smokers”.

So much for the hype about e-cigarettes helping smokers to quit. The evidence suggests the opposite to be the case.

E-cigarettes are marketed in all media, including television commercials, sports and cultural sponsorship, celebrity endorsement, social networking, online advertising, point-of-sale displays, pricing strategies, and product innovation. E-cigarettes are being sold as a “cool’ product. The same image is being promoted as was the case previously with tobacco advertising. The e-cigarette user is modeled as independent, making a lifestyle choice, identifying with celebrities, at fashionable, trendy places and activities. As the WHO report correctly noted, some e-cigarettes are marketed as socially superior to conventional cigarettes. However, “unsubstantiated or overstated claims of safety and cessation are frequent marketing themes aimed at smokers. Some ENDS marketing also promotes long-term use as a permanent alternative to tobacco, and a temporary one in public places where smoking is banned.”

Glamorizing smoking and attracting children and non- smokers are part of the message. The use of flavours in the marketing such as candy-like flavours are likely to entice children or teenagers to experiment with e-cigarettes.
It is in the interests of the industry that the e-cigarette remains unregulated, that so-called experts state that the safety is unknown, and will not be known for decades. The truth is that we know now that e-cigarettes are unsafe.

Physical, Cognitive and Mood Effects
The most commonly used reasons for vaping on e-cigarettes are that they aid quitting smoking, help avoid relapse, reduce the urge to smoke, and are a lower risk alternative to traditional smoking. How much nicotine does vaping put into the blood? Does it have the expected effects on urges and craving? Dawkins and Corcoran (2014) studied the effect of using an 18 mg/ml nicotine first generation e-cigarette on blood nicotine, tobacco withdrawal symptoms and urge to smoke. The study was supported by SKYCIG Ltd. and the lead author has received sweeteners from the e-cigarette industry. Hence:

Fourteen regular e-cigarette users (3 female) who had been abstinent from smoking and e-cigarette use for 12 hours completed a 3-hour testing session. Blood was sampled and questionnaires were completed concerning their tobacco-related withdrawal symptoms, urge to smoke, positive and negative subjective effects at four stages: baseline, 10 puffs, 60 min of ad lib use and a 60 min rest period. Complete sets of blood were obtained from 7 participants. (That’s a bit odd – what happened to the other seven? ) Plasma nicotine concentration was found to rise significantly from a mean of 0.74 ng/ml at baseline to 6.77 ng/ml 10 min after 10 puffs, reaching a mean maximum of 13.91 ng/ml by the end of the ad lib puffing period. Tobacco-related withdrawal symptoms and the urge-to-smoke were significantly reduced, direct positive effects were strongly endorsed and there were few reports of any adverse effects.
The authors concluded that reliable blood nicotine delivery does indeed occur after acute use of this brand/model of e-cigarette in a sample of regular users. Hardly surprising I guess. It’s a bit like asking whether drinking whisky puts alcohol into your bloodstream and gets you drunk?

Conclusions
1) E-cigarettes are branded as a cheap, cool and less risky alternative to conventional cigarettes. They may well be cheaper and even ‘cooler’ perhaps, but they are certainly not risk free and certainly not safe.
2) Nicotine is a lethal poison. Lack of safety of e-cigarettes and e-liquids is a major issue. Many poisonings are occurring as infants and children are drinking e-liquids directly out of the bottle.
3) The e-cigarette can be a stepping stone to conventional cigarette use, which leads to dual use, then to conventional smoking and possibly to abuse of other drugs.
4) The only way to stop smoking is to eliminate nicotine from the body. Smokers who switch to e-cigarettes remain addicted to nicotine. There is no convincing evidence that E-cigarettes help smokers to quit.
5) E-cigarettes are an obstacle to the process of nicotine elimination and are not helpful. The only safe way to stop smoking is to avoid any form of nicotine from entering the body. Type II homeostasis enables a reset to occur, removing the need to have any nicotine inside the body.